Rising costs of fossil fuels are ushering wood stoves back into homes, and making people already surviving on wood fires feel like they made the right choice. Its also creating a windfall for dealers who are hustling to keep pace with demand.

In Alaska, always a good indicator when it comes to measures to protect against cold, wood stove dealers are reporting sales for September up 300 percent over September 2004, and it’s not yet even the peak of the sales season. 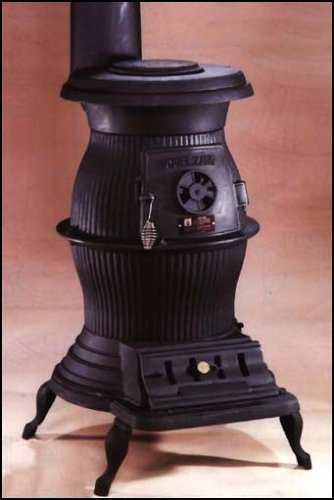 Railroad Potbelly Stove for under $500 from Amazon US

“If we can keep our sanity, it will be a very good year,” said Nathan Sapp, a salesman at The Woodway, a Fairbanks shop. “We are encouraging people to do their own installations or find other contractors. We are booked beyond belief. Ordinarily we would not be re-ordering product at this time of year … but with the cost of oil going up, a lot of people are going back to wood,” he said.

He said demand for oil stoves was down and that he had a number of customers replacing their old wood stoves with more heat-efficient new models. Depending on the layout of the home, and where the customer wants the stove placed, installation costs, including the hearth and chimney stack, can run to nearly double the cost of the woodstove, he said.

Manufacturers like Blaze King Industries, in Walla Walla, Wash. are at full production, with the demand exceeding production capability, said Chris Neufeld, vice president of the firm. “If I had the necessary inventory to cover, I could easily double sales,” Neufeld said.

“All the dealers are buying stoves like crazy right now,” he said. “The prospect of heating your home with gas this year is absolutely frightening.”

Neufeld said the industry was caught a little bit off guard, as Hurricane Katrina reminded people all over the United States how difficult times could be if power was shut off. “People buying wood stoves are not panicking,” he said. “They are seeking independence off the grid from the power companies.”

Quadra-Fire’s Vince Bossany said sales were up 14 percent over a year ago.

Dan Michaud of Alaska Fireplace & Accessories, on the Parks Highway north of Wasilla, said people who considered a wood stove for backup heat are coming in and buying now. Michaud said when he saw the price of oil rising this summer, he ordered more stoves early, and is selling three times as many as a year ago.

“It’s not only because of the cost of fuel, but the higher technology of the new wood stoves that makes them more efficient,” she said. “Compared to last year at this time, wood has become a main topic now for energy efficiency,” she said.

“People are looking at anything to save money.”

All That’s Practical about Wood: Stoves, As a Fuel, Heating – Including Wood Pellet Stoves – buy it from Amazon $17.95

While some buyers are most interested in the aesthetic qualities, and how it fits into the decor of the home, most are looking for a reliable heat source, dealers said. Many areusing wood for a backup heat source, but its a primary heat source in a number of homes.

Blaze King, Quadra-Fire, Vermont Castings, Hearthstone, Earthstoves, Jotel, Drolet and Scan are among the more popular brands with US homeowners.

The rush for wood stoves, meanwhile, has created a business boom for firewood sellers and chimney sweeps.

Joe Ladue of Alaska Fireplace Services said he is twice as busy as a year ago, inspecting and cleaning chimneys, and with installation services. “I’m getting two calls a day now for wood stove installation,” he said.

“It’s kind of like the millennium,” he said. “It was amazing how many wood stoves we put in. It was a banner year.”

Dick Moriarity of Moriarity Wood Sales in Peters Creek, north of Anchorage, said with the price of oil where it is, he is anticipating a very good season. “It started earlier this year than normal,” said Moriarity, who is getting $160 a cord, up $10 a cord from a year ago. “We sold a bunch in August.”

For those who choose to fetch their own firewood, forestry officials had good news. Dean Brown, acting director for the Forestry Division, Department of Natural Resources, said those hoping to beat the high cost of keeping warm this winter would have an easier time cutting firewood on state land this fall.

“Americans have a tradition of relying on firewood as a heating fuel of last resort, and with the current high prices of fuel oil we want to help make fire-killed wood from our Interior forests available for firewood,” Brown said.

With a simple permit from the division and a fee of $5 per cord, you can now cut from three to 10 cords of dead-and-downed trees each year for personal, non-commercial use.

In Alaska, Since 2002, wildfires have scorched more than 13 million acres of land in Alaska, nearly all of it in the Interior, Maisch said. Trees killed by the fires — but not consumed by them — are now well-seasoned and should make good fuel for stoves and fireplaces, he said.

The division is preparing maps showing state lands affected by the wildfires that are available for wood cutting, and the best roads or trails to access them, Maisch said. The division is working actively to identify new areas for woodcutting on state lands near Chena Hot Springs Road and the Steese Highway, he added.