The Off-Grid team are going off-grid for a while…. to the Green Man Festival in Hay on Wye, and then for a bit of wild camping. So you won’t see many updates in the next few days.

We can’t invite you to join us as at Green Man as it is sold out, but maybe see you there next year? We’re particularly looking forward to Bonnie Prince Billie, aka Will Oldham, and his sad-eyed, poetic ballads.

Come back soon, though, and in case you feel like going to a festival yourselves, here is a list of what else is happening this weekend around the UK – click on “more” for the full list. 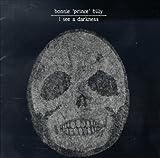 I See a Darkness CD – UK edition from Amazon

Londoners might like to try the free Ska Festival in our local park, Haggerston Park, Queensbridge Road, London E2, from 2pm to 6pm Lin the park from 2pm until 6pm, featuring the Top Cats as well as other ska bands, and a Ska dance workshop before the TCs hit the stage.

The weekend also includes ceilidhs, a Young Folk Night, Grand Parade, workshops and seesions. Many events are free, taking place in the street and local pubs.

An evening of music at the Eden Project in Cornwall, part of the Eden Sessions. All proceeds from the event will go to the Eden Trust.

No camping on site, or dogs.

A three night event featuring some of the best local bands in the area plus alternative and hip-hop DJs. Doors open at 8pm and the line-up is as follows:

Friday:
The Shakedown, Kennedy Sunday, One Inch Men and The Lakes.

Saturday:
Spencer, Dandelion Killers, The Counterfiets, and The Labels.

This outdoor event features live music and artistic performances alongside some of the finest European DJs on a 12 hectare site in the idyllic surroundings of the Yorkshire Dales (license pending).

There are three outside stages, two marquees, three sound systems, and an Urban Circus Tent, Cabaret Tent, market with craft stalls, and food from around the world.

6 hectares has been put aside for camping and there are also flushing loos!

Pontardawe Music Festival
Friday 19 August until Sunday 21 August 2005
Music, dance and song with the odd bit of poetry and arts of all description thrown in for all the family.

This weekend festival of Classic Rock with a bit of everything else thrown in (Folk Rock, Ska, Punk, Blues, Prog, Jazz Rock Funk & Latin Fusion! etc).

The Secret Garden
Friday 19 August until Sunday 21 August 2005
Set in 10 acre landscaped garden, bordering a river and lake, The Secret Garden is a garden-party-gone-crazy; there are tree houses and giant hammocks, mahogany bars and marooned sailors, space-hopper races and lost vicars, several elvises and even snail racing!

Poets and performers include Lockett, Chris aka Ventriloquist, and Sophie Bolton et al.

Rudgwick Music festival
Saturday 20 August 2005
This festival first opened it’s doors to the public back in 1997. Having changed venue a couple of times, they can now accomodate camping and a wide range of local bands. All money raised goes to both national and local charities.

There’s music from midday until 11pm plus real ales, a balloon race, air slide and bouncy castle, stalls and food.

Alfold, Surrey –
Cost: £8 in advance; £10 on the gate; accompanied children get in free

V Festival (Chelmsford)
Saturday 20 August until Sunday 21 August 2005
There’s a line-up of around 80 bands playing on four music stages. The headliner for one night is Oasis, and for the other night there’s joint headliners of Scissor Sisters and Franz Ferdinand. For the full confirmed line-up, see here.

All tickets are sold out, but you may succeed in picking up an unwanted ticket at face value at Scarlet Mist.

The site is open (for weekend campers) from 10am Friday until midday Monday.

Reading, Berks –
Cost: varies depending on the event